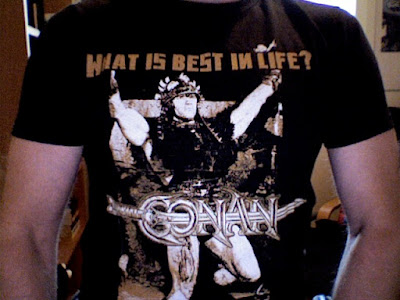 In one of the winters of my mid-twenties discontent a series of unexpected events along with some hedonistic decisions and a skewed sense of what is hilarious resulted in the single most ignominious moment of my life. They say we only die once. I disagree. We die countless deaths on the way to the last one: of despair, embarrassment, humiliation. Come now and join me in a tale of one of those petite morts. A messy one at that.


On this particular night the goal was simple if not routine at this point of our misspent youth: Crush our enemies, see them driven before us, and to hear the lamentations of their women. The reality of which translated into: consume copious amounts of cheap recycled beer, cavort with nubile young ladies with low standards whom have hopefully also consumed copious amounts of cheap recycled beer, and avoid getting into any type of trouble that may result in grievous bodily harm being inflicted upon our fragile persons.

The best laid plans of mice and men and all that flowery Robbie Burns stuff. Let’s just rip this bandage off and roll around in the salt a while.

On a chill winter’s night many moons ago, five of us piled into Castle Greyskull, my bench-seated behemoth of a K-Car, and set a course for the University located several cities away where some of our more scholarly comrades endeavoured to increase their intellect through the alcohol induced culling of slower brain cells, addition through subtraction. The atmosphere in Greyskull was light and jovial, the banter what you’d expect from guys who have let you sleep in their bathtub so as not to get vomit on their carpet: proclamations of ill-gotten shotgun privileges, boasts of the bevy of buxom babes that would be bedded, and accusations directed at those who smelled that which most certainly had been dealt. There was an incessant cacophony of complaints regarding the soundtrack I selected for our sojourn: non-stop Goth (not to be confused with Emo, which is puerile and utter shite). I was a stalwart supporter of the Doom & Gloom Movement, and attired myself accordingly: All black, all the time...black shitkicker boots, black pants (since we’re talking shame I’ll admit that I had on occasion worn leather pants, this, however, was not one of them), and black t-shirts advertising my adoration of bands that made you want to either drink a quart of bleach or stand at the edge of the vertiginous abyss in the pouring rain and scream in rage until the veins in your neck pop like a gamma radiated Henry Rollins. My darker musical and fashion tastes were a source of bemusement and harassment from my friends who were rockin’ their Dockers to the likes of U2 at the time, but my car, my rules, my tunes, so shut yer cakehole!

Upon entering our less than studious amigos’ hovel our olfactory senses were assaulted by the not unfamiliar yet strangely comforting aroma that was equal parts stale beer and fast food, and the by-products of both. Pleasantries such us “What’s up Gaylord?” and “Suck it, douchetard” dispensed, we set out on foot for the nearest watering hole.  As I look back in the retelling I’m envisioning us confidently strutting through the city streets in Tarantino-esque slow motion set to a soundtrack of some obscure yet totally badass 70s song, and I encourage you to do the same. In reality we were a clumsy staggering gaggle of awkward and unkempt 20-somethings tripping over our Docs and desert boots and own self-importance. We engaged in the act of Priming--the time-honored ritual of chugging as much cheap straight liquor as possible prior to hitting the bar, maximizing our limited financial resources and minimizing both our inhibitions and ability for critical thinking. Our destination was an underground club that catered to idealistic destitute students who still believed that the world was their oyster and that they had invented thought. When I say “underground club”, I don’t mean that it was some elitist enclave that only the select Chosen had access to; I mean it was literally 20 feet underground, a rickety flight of stairs leading to a windowless filthy shithole, but it suited our purposes:  no cover charge, cheap recycled beer, and lots of young ladies going through a period of self-discovery and experimentation as a means of working through their low self-esteem.

Of its many flaws and infractions this firetrap's most unforgivable crime was the music. Music is, was, and forever shall be an intrinsic and inseparable part of my life, but by the very nature of this being a university club DJ’d by university students, the soundtrack to our evening sucked balls. In a futile attempt to educate the denizens of this earthbound Mos Eisley I implored the DJ to play anything by Bauhaus, Joy Division, Skinny Puppy, Sisters of Mercy....for all that is good and holy I'd even settle for a little Alien Sex Fiend! I was met with looks that vacillated between confusion and alarm. In a desperate bid to abate the harassment the now frightened maestro suggested a one-time only set of Nine Inch Nails, Rage Against The Machine, and Ministry. I could work with that. I magnanimously and drunkenly conceded and hit the sticky dance-floor. I flopped around like an angry epileptic octopus on amphetamines, creating a frightened berth around me. The only thing that I can attribute such commitment to this ugly piece of performance art would be a cathartic release of familial resentment and Catholic repression. Or the consumption of a legendary amount of alcohol. I say this because then, as now, I find dancing to be the most ridiculous of endeavours for a man to engage in even if you have the hips of Adrian Zmed and the moves of Deney Terrio combined. Which I did. In spades. But I digress.

My spasmolytic congress with the danceteria had left me overheated and drenched in perspiration, not all of it my own. One of my Docker rocking comrades commented that my face was red like a rose in a thorn bush, like all the colors of a royal flush. Beer and bourbon seeped from my pores, and my black uniform clung to me uncomfortably. The world began to tilt unnaturally. I needed to cool down, I needed fresh air. I headed to the base of the stairs, the only outlet for oxygen in this dungeon, and collapsed against the wall, one foot up, arms folded across my chest, unlit cigarette dangling from my mouth like a sullen James Dean, the embodiment of angst. I had just redesigned cool.

As I gulped in what little air wafted through the entrance a gaggle of obviously first-year students reinventing themselves shambled in and cued up in an orderly line bristling with hormones and idealism in front of me. The head of the line, all adam's apple and acne, silently extended his drivers licence to me. Without pause I accepted it, squinted in affected scrutiny, handed it back and blandly declared "$2 cover tonight". The group unquestionably reached into their chained wallets and Hello Kitty purses and produced the cover charge which I promptly collected and pocketed, even making change for the future hipster in the oversized Dinosaur Jr tee. I remained staked out at the foot of the stairs repeating this ruse for the next 25 minutes, accepting ID and lucre until I had amassed $76.

I knew my entrepreneurial venture was about to come to an abrupt and violent end when I spied four BOUSes (Bouncers Of Unusual Size)advancing towards me like a herd of ornery pachyderms and I was a wayward ivory poacher asking for directions. To their credit these knuckle-draggers were alarmingly fast for brutes lacking necks. I received several cursory sedating blows before I could attempt to explain I was just holding the money for a friend. Sausage like fingers closed around my Billy Idolesque coiffed 'do and dragged me up the flight of stairs, patrons calmly stepping aside as I was unceremoniously deposited onto the icy concrete of the parking lot. I'd danced this particular tango before and knew that retaliation was a fool's gambit. I opted to turtle, protecting my angelic punam, and feign death, patiently suffering the powerhouse kicks and punches that rained down upon my ribs, kidneys, spine and legs. The cro-mags eventually lost interest and lumbered off, celebrating another successful no-contest group assault.

I waited until I could no longer hear the sound of them breathing through their mouths before (for the benefit of those who had witnessed this biblical smackdown) gingerly picking myself up and casually dusting myself off as if I had merely stopped to take a short nap on the pavement. I could taste my spleen.

Clutching my hard earned doorman money in my bleeding fist and cursing my friends that were oblivious to my impromptu exodus I limped towards the nearest fast-food establishment.

No enemies had been crushed. No nubile women lamented or cavorted. Trouble that resulted in bodily harm was most decidedly not avoided.

However, copious amounts of cheap beer was consumed. One out of three ain’t bad. And I was up 76 bucks! I'd call that a win!

The best part? I haven't even gotten to the embarrassing part yet. 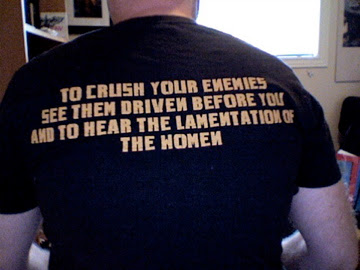