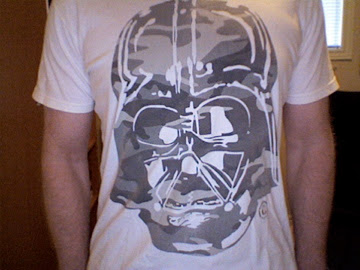 That's the second biggest Camouflaged Darth Vader head I've ever seen!
Posted by The Wearer at 3:49 AM 2 comments: 
The Saturday had started off normal enough, a bowl of Boo Berry and some Hilarious House of Frightenstein, followed by the post apocalyptic adventures of Thundarr, Ariel, and Oookla the Mok. Then onto an extended game of Wizard of Wor forced upon me by my brother, which quickly escalated into violence and ended with extensive electrical damage to the family domicile. This expensive disruption to my father's otherwise quiet weekend, coupled with a Jack Tripper-esque misunderstanding resulting in him receiving a head wound, necessitated a daring escape from my own home. My pops was pissed and I was fleeing the Wrath of John.


Once free from what would surely have been my messy demise I hauled ass, limbs flailing like an epileptic in a strobe light factory.  I didn't stop running until I hit the top of my street and Old lady Zimmerman's Place. Now what? I knew how to get to all but 3 destinations from my home: the Mall, my grade school, and my friend Paul's house. Paul was on vacation with his family, a yearly event he referred to as "Going Abroad". To the Left was the Mall, to the Right my Catholic grade school, which was closed for the summer. I'd never been to The Mall without supervision, mostly in part due to my mother tipping me off about the undercover RCMP officers that posed as congenial teenage video arcade patrons that wanted nothing more than to arrest me for trafficking the narcotics that the undercover Drug Dealers that also posed as congenial teenage video arcade patrons would innocuously slip into the pockets of my hand-me down GwGs.


Back to school it was. I crossed the street and tried to look as inconspicuous as possible, but by the very nature of trying to be unseen I felt I was as exposed as an aroused leper in a nudist colony. I don't know what rationale goes through the minds of the average pre-teen these days, but I seemed to think that the best way to detract attention from myself and remain invisible would be to take on the guise of a homeless brain injured gladiator from Thunderdome. I pushed down one of my knee-high yellow and black trimmed sport socks, bunching it around my boney ankle, the other pulled high, clinging tenaciously to my hairless knee. I put my Frogger t-shirt on inside out and backwards. Crushing a clump of sun-baked soil in my hands, I rubbed the powdered dirt on my face and arms, and using the sweat collecting on my brow and from behind my knees like a precursor to gel I tousled my shoulder length shock of white hair into a tangled mess. I looked like a crazed diminutive post-apocalyptic Albert Einstein.


I was across the street from the school now, and hesitated before proceeding any further. The parking lot should have been empty but it was now filled to capacity with Full-Size behemoths: Plymouth Gran Furys, Dodge Diplomats, Chrysler Fifth Avenues. There was an overflow parked three deep on what I knew as the "British Bulldog" lawn, a field of magnetic CB antennas swaying in the sticky summer breeze.


As I approached my school there was a nagging gnawing in the pit of my stomach and a not entirely unpleasant tightening in my testicles, feelings I have long since learned not to ignore. Something was not quite...right. With every step a suffocating pressure began to wrap itself around my entire body. It was like falling into a swimming pool wearing clothes two sizes too large and becoming tangled in the pool cover. And if that wasn't enough to raise an eyebrow, there appeared to be 2 hulking men patrolling the parking lot.

The sun was setting, casting a crimson hue over the brown bricked structure. Summer clouds like swabs of bloodied cotton dabbed ineffectually at the slashed wrists of the sky. This was a red and angry world. Every nerve and fibre of my prepubescent being screamed at me to get the fuck out of there. Danger Will Robinson, Danger! But I was young and a boy and Curiosity kicked Common Sense's ass every time. Slipping past the sentries was no problem. 5 days a week this brick and mortar was my sanctuary, my playground, and my war zone. A byproduct of my love for science fiction and fantasy was being adept at hiding and eluding.


I imagined the patrolling security as a pair of roving Daleks. In my yellow and black socks I ran along the unwatched side of the building, going in low and fast like some strange albino bee flitting from parked car to parked car. There was a moment when I almost blew my cover by fumbling through a completely awesome but unnecessary shoulder roll from an AMC Hornet to a rusted out 1973 Oldsmobile Delta 88. The thick thorny hedges that ran along the entire front of the building afforded me plenty of cover and I easily slipped past the Daleks and into the front door that was propped open with a worn wooden wedge due to the air conditioning being shut off during the summer break. Too easy for this renegade barbarian and his fabulous Sunsword!


Once inside I heard the dull babble of many voices speaking at once coming from the gymnasium. As I eased the heavy door open a crack I recognized the murmur for what it was: the creepy cadence of prayer. It wasn't any litany I was familiar with, but there were plenty of "Amens" and "So Sayeths", and I found myself lulled by the rhythmic intonations.


Upon the portable wooden stage, where a mere 8 weeks ago I had brilliantly portrayed the villainous Shere Khan in a musical production of the Jungle Book, was a young woman sitting in a wooden assembly chair. And she was screaming. Not yelling, nothing intelligible, just a visceral primal scream.  And she was thrashing wildly. If it were not for the 2 burly men on either side of her holding her fast she would have surely have toppled off the stage. A third man was reading from a book I could not see and flicking water at her from what appeared to be a pestle. I could only make out 2 words above the cacophony and they were "Purify" and "Deliver".


I was frozen in shock and terror. What was I bearing witness to? I shouldn't be here. She screamed again and for a fleeting second her eyes caught mine before rolling back in her head. I REALLY shouldn't be here. Fear writhed in my belly like a swollen black worm. I began to imagine a red haired Malachi pushing his way through the crowd, singling me out as an "OUTLANDER"! I began to slowly back out before someone realized there was an interloper in their midst. A weathered calloused hand fell on my shoulder and a stillborn scream curdled in my throat. I looked up into the blank face of one of the Daleks. His eyes were not unkind and they seemed to say "You need to see this". I hung my head in resignation and he took his hand off my shoulder briefly to open the weighted gymnasium door for me. And I took off like a bat out of hell and never looked back to see if I was being pursued. I had seen enough.


I didn't stop running until I reached my driveway. In the deepening dusk I noticed that the lights were back on, like a welcoming beacon. That illusion was quickly shattered as the front door was violently flung open and my father filled the doorway, a fresh bandage adorning his furrowed brow and a scowl darkening his face as he boomed "WHERE THE HELL HAVE YOU BEEN!".


Where the hell indeed.


He was beyond pissed and I was well aware that the punishment that was to be meted out would be legendary.


I had never been happier to be home in my entire life.
Posted by The Wearer at 3:41 AM 1 comment: 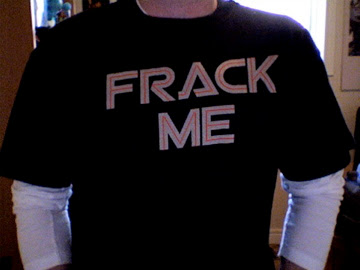 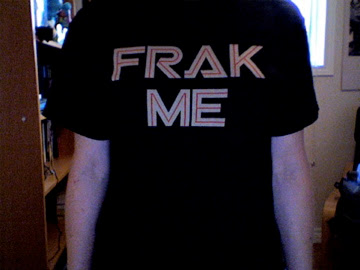 That's my wife.
The concessions she makes to humor me never cease to amaze me.
Alternately, Nerd is contagious.
Posted by The Wearer at 7:27 AM 2 comments: