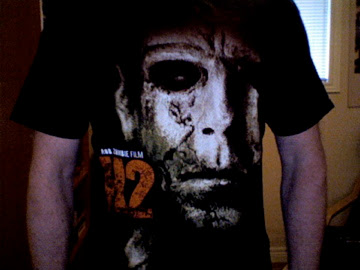 
That mythical time of year is once again upon us, a month long tribute to all things mysterious, spooky, and all together ooky, culminating in All Hallowtide. The Night of the Hunter. Dia De Los Muertos: The Day of the Dead. That feeling of creeping dread, the ominous foreboding, the ball tightening disquiet....I love every second of it!

For those who know me, or have been following on here long enough to recognize my awesomeness, they know my ghastly glee is not grounded in the thinning of any veils or the solemn celebration of any Solstices. Unlike the capricious masses my affiliation with fear is not fleeting; for me everyday is Halloween. My excitement revolves around the fact that at this time of the year the rest of society embraces my world, accepts it and, albeit briefly, me.

During the Season of the Witch exploitive consumerism ensures I am blissfully surrounded by imagery normally considered macabre 11 months of the year: gothic castles and gargoyles displaying darkly beautiful architecture and sculpture; Creatures of the Night, what sweet music they make, so rare and exotic; the Undead, representing immortality and the promise of a better day, their impending apocalypse favourable to a world of punch clocks, mortgages and Honey Boo Boo. Halloween Specials litter the coveted Friday Night slot, reminding us that The Addams' were probably the most loving and functional family, Chuck needed to kick Van Pelt's blue frocked ass, and Fat Albert was really fucking fat.

Not everyone shares my passion for hot sweaty terror, even during this awesome Autumn Equinox. Their own personal demons and aversion to a case of the Creeps prevents them from enjoying the rush of palpable palpitations and cloying fear. In my world these are the Odd and Unlucky, the Freaks.

One such weirdo is my wife.

A beacon of positivity, she is one possessed of such constant cheery disposition that she can not fathom the desire to be terrified, to embrace The Dark.  It sickens me.

We were nearly not a We.

There was almost no second date as the first was to go to the movies. More specifically a horror movie. On Devil's Night.

At this point I didn't know she couldn't handle horror movies, that there was something wrong with her. Why she agreed to go I have no idea other than she must have been overcome by the sheer magnitude of my...awesomeness. What can I say, I'm a master wooer. I'm into wooing. I guess I woo.

I wasn't one of those cheeseball contrived lame-o's who thought taking a girl to a horror movie would make her crush her face into my heaving pectorals and cling tenaciously to my steel-like biceps as her terror mounted. No, my selection of the flick was more selfish than lecherous. I had decided that I was going to be Myself, not the Ideal First Date Version of myself, and well, that could only mean I'd end up upsetting her and never seeing her again, so I might as well pick a movie I wanted to see, and all the other people I could have seen it with I'd already upset.

As it turns out it was my bluntness and complete honesty that won her over and made her swoon. And she got so freaked out during the movie that she crushed her face into my heaving pectorals and clung tenaciously to my steel-like biceps as her terror mounted, which was pretty sweet.

We left the safety of the darkened theater only to discover that a thick and baleful fog had rolled into town. You literally could not see two feet in front of you. Misshapen shadows drifted in and out of the viscous brume. When I queried in a hushed tone "What was that?!" my date and future bride slapped my arm that she had attached herself too thinking I was trying to scare her, but truth be told I swear I could hear things moving behind that murky veil, vile things, slithering...scurrying.

We blindly fumbled through the lot in search of my car, which was parked in the farthest row away from the theater in a feeble attempt at exercise. Grey faces would suddenly lurch out of the even more grey miasma, only to disappear again just as quickly; sounds were thick and muted, unearthly and slightly unreal. Unseen Things would brush passed our shoulders, like a shark testing a potential tasty morsel. I was in my element and made a silent wish to the Elder Gods that this night would never end.

I eventually found my car by hitting the panic button on my keys.

The drive home was treacherous and slow, my headlights completely ineffectual. I didn't mind, in fact I was grinning from ear to lopsided ear as the beautiful woman beside me was clutching to my free hand and leaning as close to me as her seatbelt would allow. Suddenly she screamed in absolute terror, startling me from my doe-eyed revelry and making my earbulbs tremble. I slammed on the breaks and calmly enounced "Jesusfuckingchristwhatthefuckwoman!" as I am wont to do on occasions of unexpected shrill and piercing exclamations.

She was wildly gesticulating towards the drivers side window, her mouth agape in a silent scream as though the bellow she had just loosed had stolen the last of her voice. Her fear was both intoxicating and contagious and I was hesitant to follow her gaze. I slowly admired her slender arm, appreciating the  smoothness of the hollow of her elbow, noticing how the ultra fine and near invisible hairs on the appendage were standing on end, up to the supple wrist, and ending at the delicate and quivering finger that was wagging out my window. I didn't see anything at first as I was still drunk off the image of her perfect alabaster skin.

Wait...there...a darker patch in the swirling mist. Something was there.

Something big and lumbering.
And it was coming closer.
Getting larger and more defined.
It appeared to be a tangle of fur and legs. Lots of legs. And there was a clicking and scraping of claws on the wet cement. I didn't move. Not because I was unable to or frozen with fear, but because I wanted to see what fresh hell this was scuttling towards me. I needed to see.

My heart raced with giddy excitement as I envisioned some great demon-spawned arachnid inching its way towards my open window, or perhaps it was some mutated bear, hideously deformed through years of feeding on wildlife tainted by mutagens caused by industrial pollution. Oh god please let it be a giant mutated bear!

The shadow slinked out of the obscuring fog and into full sight. My soulmate-in-waiting let out a sharp gasp. A grinning Christopher Robin-esque schoolboy in knee-high wellington boots and a blue and yellow Paddington bear rain-slicker emerged from the enveloping damp shroud. He was being lead by two standard poodles on rainbow striped leashes. The one on the left had a pink bow tied to its overly large and adorable head.

My date suddenly burst into tears. In between ragged sobs she said "Take me home. Now".

I told you I'd upset her.