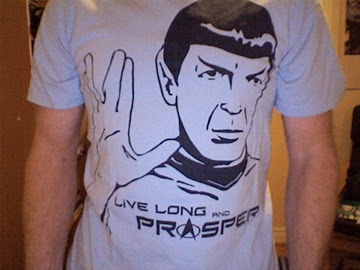 I'm not going to try to up my geek cred and tell you I'm not upset because I have attained Kolinahr.
Nor am I going to make reference to the Genesis planet.
And if anyone makes a "Beam me up Scotty" joke I may just go amok time on their ass.

I'm also not going to suggest the world lost a great actor, but instead perhaps an iconic one, and what was lost was what he represented to me.

I guess what I'm saying is Spock is dead.
And with him went part of my childhood.

Noted psychoanalyst Erik Erikson, who was disappointingly in no way the viking warrior his name suggests, put forth that who we become is shaped during our formative years between the ages of 0 and 11. We learn during this time about who we are and how we view the world, about guilt, and purpose, and identity.
I am swinging swaggering adult proof of this. Sure I evolve and sort of mature, but the core concepts, the things that make me ME, haven't changed since I was a swinging swaggering kid with feathered hair and hand-me-down bellbottoms.

I still actively engage in the same neo-maxi-zoom-dweebie pursuits now that I did when I was but a knee high to a grasshopper nerdling, the foundation of which being science-fiction.

I firmly believe that many of us, The Chosen Ones, are born with a predilection for fantastical fanaticism, but if stifled it will wither and die like an unwatered Triffid.

My obsession with all things outer-spacery was far from malnourished. It was encouraged and nurtured by my father. This is likely due to the fact he had no one else to enjoy his own obsession with sci-fi. My mother by virtue of being my mother was a girl, and therefore had no interest or time for silly space operas. She preferred the reality-based shenanigans of Coronation Street. She couldn't get behind the concepts of alien races, sentient robots, or space exploration, yet had no problem swallowing the walk-on-water pill washed down with a tumbler of raise-the-dead. And my brother, The First Born, stayed in his room studying all day, scarfing down Jos Louis, and devising new ways to make my life a living hell.

So The Fat Man and I escaped our tormentors by submersing ourselves into the farscapes of science-fiction and fantasy.
We didn't see eye to eye on, well, anything really, except sci-fi. It was the one thing we actually did together. Our relationship outside of these moments was that of Lawgiver and Law-Breaker. We'd watch anything sci-fi from Buck Rogers and The Six Million Dollar Man (Bigfoot, baby!)to The Man From Atlantis and Quark. But our main staple, what we truly bonded over, were the exploits of Captain Kirk and the gallant crew of the USS Enterprise. It seemed to be on almost everyday in the 1970s, and we watched faithfully. Together. Side by side. My dad favored womanizing problem-solving-through-violence Kirk because he fancied himself somewhat of a lothario himself. I was a fan of that green blooded hobgoblin Spock, as he straddled the lines of sci-fi and fantasy, and let logic prevail instead of letting surrounding negativity get him down. The ears and the nerve pinch were pretty sweet too.

Leonard Nimoy kept popping up in in these 22 to 45 minute geek excursions into escapism my father and I took together during my childhood years. Nimoy didn't just bring us Spock, oh no.

He brought us Paris in Mission Impossible.
He brought us the new age self help guru David Kibner in one of my all-time favourite movies, Invasion of the Body Snatchers.
He brought us In Search Of...(Bigfoot, baby!)
He unabashedly brought us his vocal stylings to the Ballad of Bilbo Baggins.
Nimoy brought the world all of these things, but most important to me he brought my father and I closer together, he brought us common ground.


When I heard the news of Nimoy's passing I immediately wanted to talk to my father. I was 4 digits into dialing his number when I remembered he too had also passed on recently. He had boldly gone...wherever.

"I guess he can tell him himself" I said aloud to no one, but the idea of that meeting made me smile.

Posted by The Wearer at 1:05 PM No comments: