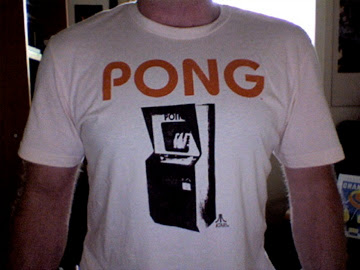 1975, we were still half a decade away from Pac-Man Fever, but not far enough away from The Hustle. We weren't the unplugged barbarous Neanderthals actually interacting with family and friends, armed solely with popomatic dice and Community Chest cards that the history books make us out to be.

Nope, we had Pong.
The home version, exclusive to Sears.
Pong = 2 sticks and a square ball.
Pong = Genius.
The golden oldies were more challenging than todays' uber-realistic hyper-kinetic games. Those shiny new kids on the block are redundant or finished within a few days of mindlessly hitting the fire button. With Pong one could literally spend hours and hours "boop-bip, bip-boop-ing". And I did.
Hours and hours of laughter, always ending in violence.
But despite all its sophistication and unconditional entertainment, the world moved on and Pong limped behind, like the lame gazelle at the edge of the croc infested watering hole. There was a new sheriff in town and his name was Space Invaders.
I remember my family driving my brother and I out to The Old Spaghetti Factory located in “The City” in '78 expressly to see this new video harlot pimped by Bally Midway that had stolen the affection away from our slightly wrinkled and corseted Pong. I was so excited my bladder shrank and there was no way I was going be able to wait for our order to arrive. I broke out the time tested Plan # 9 and tormented my father with incessant convivial chatter until he begrudgingly gave my brother and I each a dollar of his hard earned cash, making it known that he viewed both our youthful exuberance and this expenditure as Wasteful.

I gratefully looked up at him in genuine appreciation as he ordered a very very dry Beefeater martini on the rocks with a twist, and coolly lit a John Player Special. Surely he must be reminiscing what it was like to be an excited goofy kid. He looked me straight in my overly large unblinking eyes that my cranium hadn't quite caught up to and said "Don't cause any shit for once", and dismissed me with a flick of his cigarette.

I bolted to the back of the restaurant, my heart racing, already formulating boastful recess juice-box banter in my head of my adventures with the Space Invaders, understanding what Columbus must have felt as he set sail from Genoa in the Santa Maria.

I rounded the corner and came to a halt, my Keds audibly squeaking.


There was a vast line-up of fidgeting smelly kids clamouring to play the solitary machine, necks craning, quarters grasped tightly in their dank white knuckled fists leaving indelible imprints of the majestic Canadian moose on their sweaty palms.


There was jostling and jockeying a-plenty, pushing and shoving, whoops and snarls. An Italian breadstick was tossed into the air, slowly spinning crust over crust, and just for a second in the reflection of the stained-glass hanging light fixture, I swear it looked like a cylindrical space ship.
The air was rife with arabiata and nerdsweat.
Standing on my tiptoes to get a glimpse of these marauding invaders from space, I shifted my weight to what my wife calls my Crazy-Foot, and my perspective changed just enough that I noticed hidden in the shadows a hulking plain monolith. I tentatively inched towards it for a closer look.
There, next to this new Electric God, lonely and abandoned, was the now 3 year old antiquated and obsolete Pong.
Hello old friend. How've ya been?
Wiping the dust from its screen, I dropped a quarter into the coin-slot with an echoing empty clank. I swear I heard a sigh emanate from its microchipped bowels as the screen flickered to life.
There wasn't a gradual acclimation, it was an immediate response.  Muscle memory and nostalgia combined and I quickly became lost in my old friends house. I wasn't playing against the machine, we were playing together, in hypnotic tandem. Synchronicity. A couple of the kids who were becoming impatient awaiting their turn at The Future gravitated towards Pong & I, much like a crow does with something shiny. Then a few more defected, and their cheers, carried on the winds of garlic and oregano, brought even more still, until I was surrounded by a gaggle, a murder.


I played for 90 minutes on 1 quarter and entertained the throng. I was on fire, I was gold, I was a superhero.
A Pong playing superhero.
I was startled from my revelry by the ugly abrasive sound of fat meaty knuckles uselessly hitting the thick glass playing field of the neighboring alien armada. The savage blood curdling hiss and stream of previously unheard profanities that ripped from the prepubescent player's throat signified a vacancy as his last laser cannon was destroyed by the quickly descending invading pixels.

The throng, MY throng, quickly abandoned me as they viciously fought to be the next in line to waste their fathers' hard earned money.

Turncoats.
I realized in that moment that I was much like that old Pong machine, limping along the cruel crocodilian shores of progress, content with the simple things, the things that are worked for, the things that endure.
They say you can never go home again, and that may be true, but that doesn't mean you ever have to leave.
Figuratively of course, not like a 42 year old Italian boy.
Posted by The Wearer at 6:51 PM 1 comment: 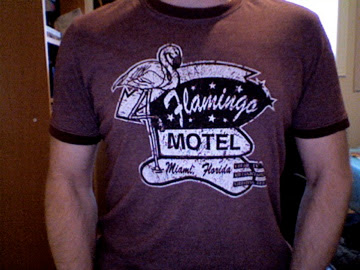 Sorry gang,  I haven't had a chance to update Shirt of the Day in a while. We've been pretty busy lately, and a bit run down. Work has this really annoying habit of being Work, a real pill, a classic kick in the balls...I mean if it was fun it would be called Play, right?
The point being I needed a break, a vacation from my usual routine.
The good news is I had time to reflect and recharge, and I'm back with vim and vigor, just a-brimming with piss and vinegar.
For you.
Always for you.
Stay tuned.
Posted by The Wearer at 10:09 AM No comments: