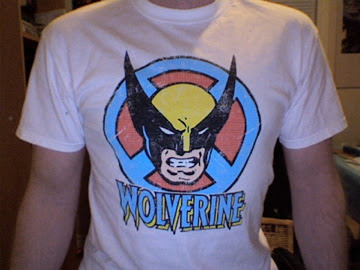 "I'm the best there is at what I do, but what I do best isn't very nice"

Weapon X, James Howlett, Logan, Wolverine...whatever. When I was a kid in the early 80's whatever you called him it amounted to the same thing: Le Derriere du Chat, the cat's ass. At the time all other comic heroes lived in Wolvie's shadow. Batman who? Spider-What now?


In our nerdalescence, my pals and I would hypothesize endlessly on the possibilities and impossibilities of a live action pre-CGI X-Men movie, debating every last detail, dissecting the logistics of the Danger Room, and weighing in on Morlocks vs. The Brood with a fervor that would have shamed the good reverend Farrakhan. I remember vehemently arguing the merits of my "perfect" cast with The Consortium.


As a fan of Westworld and The Magnificent 7, Yul Brynner was the ideal candidate for Professor X: he was bald.
He also had crazy eyebrows and was in frickin' Westworld! But I had them at "he was bald".


Arnold Schwarzenegger as Colossus, no-brainer, no-contest, no further explanation required. Timothy Daly was a passable Cyclops, and Mickey Rourke would be Beast...he'd also be Nightcrawler, Storm, and Rogue. I'd cast Mickey as the lead in a biopic about Oprah Winfrey; its a strange hetero love affair.


The role of the villainous Magneto had Rutger "Roy Batty" Hauer written all over it.


My logic was sound, my research verifiable. I had the guys pretty much sold, but the one key bit of casting remained: Wolverine. The brooding, feral, violent lynchpin to my proposal. Knowing that geeks crucify their own, I took a deep breath and boldly announced my two candidates for this pivotal role: it was a toss up between Kurt Russell and Robin Williams.


"The Computer Who Wore Tennis Shoes or Mork?! Are you retarded?! You are such a gaylord!" the cry went up, gauntlets were thrown. How quickly they turn. We were 12 and the shortsighted fools could not fathom my visionary genius.


Flash forward 16 years and its announced that Hugh Jackman, the singing dancing cowboy star of the romance-MUSICAL (romantical?) 'Oklahoma!' has the honor of being cast as the Canadian mutant Wolverine, and I ask you this: who's the gaylord now, boys?